I saw my first James Bond movie before I was ten. I have no idea, at the span of decades, which film it was, but it was almost certainly a presentation of the ABC Sunday Night Movie, back when that was a thing. I do know, however, that I liked Roger Moore’s movies more than I liked Sean Connery’s movies in those long-ago days, an opinion that changed in my twenties due, in part, to maturing tastes in entertainment but mostly to the fact that I had started to read Ian Fleming’s James Bond novels.

The Big Lots near my parents’ house had a selection of books for sale at the back wall, near the gardening supplies. And there, one day, I found four paperbacks published by Coronet Books in 1989 — On Her Majesty’s Secret Service, You Only Live Twice, The Man with the Golden Gun, and Octopussy and the Living Daylights, all with introductions by Anthony Burgess — for twenty-five cents each. For the record, these are the last four of Fleming’s fourteen James Bond books, and of the four I liked the short story collection Octopussy the best, followed by On Her Majesty’s Secret Service. The other two were not as good.

About that time, the local Waldenbooks began selling on their bargain tables hardcover editions of Fleming’s James Bond novels published by MJF Books, starting with Goldfinger and Thunderball. They had striking cover illustrations by Christoph Blumrich, and I picked them up as they went on sale.

I generally liked Fleming’s books. Aspects of the writing hadn’t aged well — Fleming had a racist, sexist streak to him — but as a prose stylist I found a lot to admire in the way Fleming constructed a sentence and set a scene. Fleming’s successors at Bond from the 1960s to the 1990s were good storytellers, John Gardner especially, but not necessarily stylists on the same level as Fleming.

Last year, when Dynamite Entertainment announced they would be publishing a James Bond comic book written by Warren Ellis, I was curious. Ellis has used James Bond analogues in his work in the past, notably John Stone in Planetary and Desolation Jones in his eponymous series. I wanted to see what he would do writing the real character instead of a disguised one.

The first story arc of Ellis’ series, Vargr, came out this week. I read through it this afternoon. 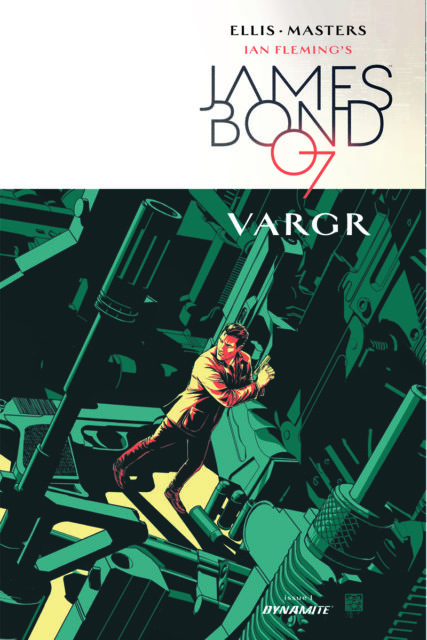 Set in the present day, we open in Helsinki where Bond stalks a man through the city’s streets, attacks him, then kills him as revenge for the death of agent 008. Back in London, M assigns Bond one of 008’s cases — a series of strange drug deaths are linked to a pharmaceutical company in Berlin, and Bond is to investigate if the company is responsible.

What looks like a simple operation turns into a bloodbath as Bond is the target in not one but three attempted murders, the officers at Berlin Station are assassinated, and Bond is lured into a bloody firefight with the Serbian underworld in a warehouse, climaxing with Bond’s mission into the villain’s impregnable fortress in the cold wastes of Norway.

Vargr is fairly straightforward, in terms of scale having more in common with a Fleming short story than a novel. Despite running 120 pages, the story moves very quickly as each chapter has an extended action sequence that runs eight to ten pages. As a result, Vargr is dense on action rather than plot.

Ellis’ Bond is a charming rogue when the situation calls for it, but he’s also a cruel bastard who coldly and remorselessly metes out death to anyone in his way. He’s willing to torture someone for information before the kill, and one on occasion he wants his quarry to know what he’d done to deserve Bond’s killing shot. As for the social circle in which he travels, he’s petty with M, an ass with Moneypenny, and barely tolerant of Bill Tanner or the Quartermaster. In short, he’s not a pleasant person at all, and he positively revels in that.

Vargr is a grounded, modern take on James Bond. As someone who didn’t like Anthony Horowitz’s James Bond novel Trigger Mortis because it was incredibly dumb, Vargr was a nice corrective. Ellis plants some plot seeds here that I suspect he’ll follow-up on in upcoming stories, but on its own Vargr works quite well. It’s not the biggest, flashiest James Bond story ever. It’s just a gritty story of international drug cartels, death, and Her Majesty’s Secret Agent with a Licence to Kill, and that’s all it needed to be.