I have easily a hundred ebooks on my Kindle that I’ve never read. Either they were freebies, or I made them from files off Project Gutenberg, or I got them as part of a bundle where I was interesting in only two or three specific titles, or I bought them cheaply from one of the various ebook alert newsletters I subscribe to. My Kindle isn’t my preferred way of reading — I still enjoy the tactile pleasures of the printed page — but it serves a function, even if that sometimes seems like a virtual “to-be-read pile” of forgotten files. 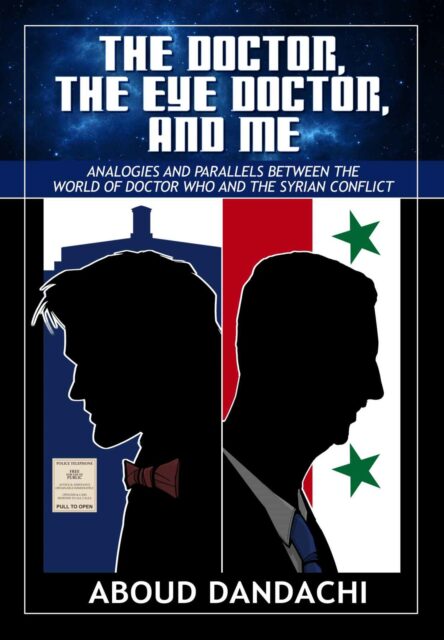 Last weekend I went through my Kindle and I found that, sometime in the past, I’d downloaded Aboud Dandachi‘s The Doctor, the Eye Doctor, and Me. Dandachi’s book, a look at Doctor Who through the prism of the Syrian civil war offered for free on the Kindle, interested me conceptually, but I never got around to reading it. In light of the fall of Aleppo to Bashar al-Assad’s government forces, I decided it was time to visit the book.

A refugee from Syria’s civil war and holed up in a hotel in a seaside city, Dandachi discovered Doctor Who as a way to pass the time while the war went on around him. A short book of maybe 25,000 words, The Doctor, the Eye Doctor, and Me looks at Matt Smith’s era as the eleventh Doctor, which corresponds to the first three years of the Syrian civil war, and relates the storytelling to his experience and the war itself.

Dandachi examines several episodes of Smith’s era — in order, “The Impossible Astronaut”/”Day of the Moon,” “The Doctor’s Wife,” “A Good Man Goes to War,” “The Girl Who Waited,” “The Wedding of River Song,” “The Eleventh Hour,” “Asylum of the Daleks,” “Journey to the Center of the TARDIS,” “The Night of the Doctor,” “The Day of the Doctor,” and “The Time of the Doctor” — and explores the ideas in the episode, the character of the Doctor, and how the episode illuminates aspects of Syria’s civil war. Initially predisposed against the Doctor due to his name — in Syria, Bashar Assad is known as “the Doctor” — Dandachi finds something compelling in the Doctor, a man whose first choice is never violence but, when forced to fight, picks his fights and plans his moves. He contrasts the Doctor with the “Eye Doctor,” Assad himself (a trained eye doctor), and finds Assad wanting. Delving into the episodes, he examines how conflict hardens and scars people (“The Girl Who Waited”), how people lie to themselves to cope with horrible circumstances (“Asylum of the Daleks”), how nature abhors a vacuum and what fills it may be as bad or worse than was had been there (“The Time of the Doctor”), even how Matt Smith’s departure and the revelation of Peter Capaldi as the twelfth Doctor represented a turning point in his life. Dandachi presents a thoughtful and unexpected take on Doctor Who here, showing how the series cuts across cultures and offers universal lessons.

In the course of his exmaination of the series, Dandachi delves into the history of Syria, how Assad came to power, how the civil war unfolded, and how Syria’s population suffered from Assad’s incompetence. (Violence, as Isaac Asimov wrote in Foundation, is the last refuge of the incompetent.) He also has harsh words for the “Friends of Syria,” countries who condemned rhetorically Assad’s brutal suppression of his people but stood by and did nothing as he unleashed chemical weapons attacks on the rebels and destroyed cities like Homs and Aleppo. He writes about what it’s like to be in a city block that’s being shelled by the Syrian military and notes how unrealistic it was for the Gallifreyans of Arcadia to run out into the streets as the Daleks move in to exterminate.

An intensely political book, this book is a compelling account of what remains, even with the fall of Aleppo and a tenuous truce, an ongoing humanitarian tragedy in Syria, one man’s discovery of Doctor Who, and the lessons in life and politics he drew from the series. Occasionally repetitive, sometimes in need of a good copy-edit, The Doctor, the Eye Doctor, and Me is literate, thoughtful, and worth the time for any Doctor Who fan with an interest in geopolitics and the plight of Syria’s population.