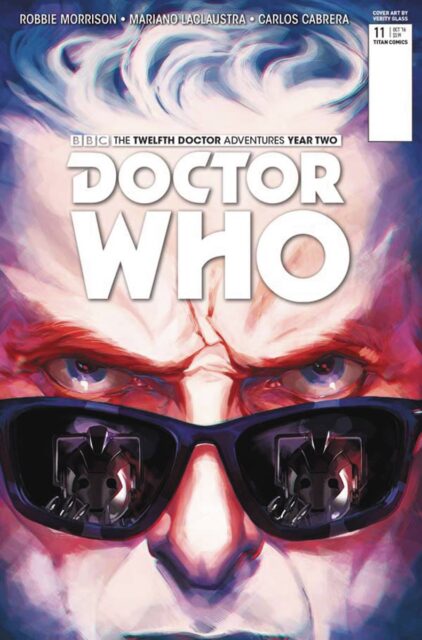 This week, Titan Comics wrapped up a storyline in the twelfth Doctor comics, “Terror of the Cabinet Noir.”

Paris, 1695. Cardinal Richelieu seems to be immortal, and there’s a darkness permeating French society. While the public awaits a celebration of the Sun King, the upper classes are taken by an enchanting twenty-two-year-old opera soprano, one who is as quick with the sword and an insult as she is with a song. Her name is Julie d’Aubigny, and when she crosses swords with the Doctor in the streets of Paris she embarks on a wild adventure that involves Dark Matter invading our world and possessing Richelieu, making him both near-immortal and near-omnipotent.

Julie d’Aubigny is one of history’s notorious badasses, a bisexual opera singer and swordswoman who lived fast, fought hard, and died young. Robbie Morrison’s script for “Terror of the Cabinet Noir” doesn’t shy away from her unsavory history; issue #11 features a four-page flashback to Julie’s childhood, her arranged marriage, her love for another woman that led her to join a convent just so she could kidnap her paramour and run off with her, and her skill with the sword. She’s an incredibly headstrong and self-confident woman, the smartest person in the room and one who doesn’t suffer fools at all, quite capable of defending herself with her snark and her sword, and when she steps in the TARDIS at the end of issue #11 she doesn’t have time for the usual “It’s bigger on the inside” nonsense.

Despite a rushed ending in issue #13 (I felt that it was missing a page or two as the plot skipped ahead of itself), “Terror of the Cabinet Noir” is an immensely fun story thanks to a captivating characterization of Julie as a bright and quick-witted person who doesn’t have the time for anyone’s bullshit (including the Doctor), and the artwork by Mariano Laclaustra, as colored by Carlos Cabrera, has an almost painted quality to it. This feels very much like a “companion introduction” story; besides the villain referring to Julie as the Doctor’s “companion,” there’s a nice rapport between the Doctor and Julie, we “see” much of the story through Julie’s POV and the narrative weight rests on her, and at the end of the story she says outright that she’s looking forward to more adventures in time and space (to which the Doctor notably does not say no).

Personally, I hope Julie sticks around until Titan introduces Bill in the summer. Titan has done well introducing original companions (the tenth and eleventh Doctors have traveled exclusively with comics-original companions in Titan’s comics, and they’ve just introduced a comics-original companion for the Nine/Rose/Jack team), and bringing an historical personage into the TARDIS would, I think, be quite fun. (As an aside, when I watched The Tudors years ago, I dreamed of a Doctor Who series with Sarah Bolger’s Princess Mary as the tenth Doctor’s companion.) Julie d’Aubigny would have to leave eventually — the BBC would prefer Bill (and Nardole, I’d assume) in the TARDIS as soon as possible, and Titan is already promoting the Free Comic Book Day special in May as Bill’s comics debut — but until then, she could have a nice ten-issue run (from her debut in Year Two #11 to, presumably, Year Three #5). Some television companions don’t even last that long. 🙂

If, like me, you want a nice Doctor Who pseudohistorical, “Terror of the Cabinet Noir” in Titan Comics’ Doctor Who: The Twelfth Doctor Year Two #11-13 is a welcome choice with its fun characters and great artwork. Plus, it’s a great jumping-on point for Doctor Who fans.

Just ignore the Cybermen on the cover to issue #11. There are no Cybermen here. Titan’s Doctor Who covers, especially when you get into the variants, don’t typically reflect the contents. 🙂