If the first book in Alessandro Gatti’s Sherlock, Lupin & Me series, The Dark Lady was the secret origin (ie., how they met) of the adventures of Sherlock Holmes, Irene Adler, and Arsène Lupin as teenagers, the next two (The Soprano’s Last Song and The Mystery of the Scarlet Rose) are in the main Sherlock Holmes stories, with significant roles for Lupin and Adler. The fourth, The Cathedral of Fear, is more of an Adler adventure with her sidekicks Holmes and Lupin, so it moves differently and is far less of a mystery. 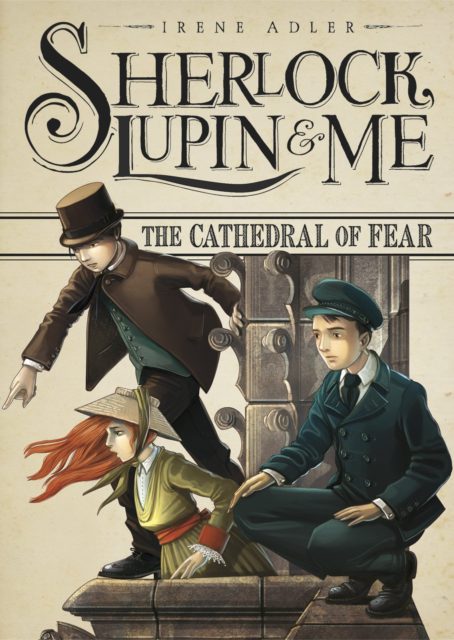 In the spring of 1871, during the Franco-Prussian War, Irene’s father decides to move his family back to France from London for his wife’s health and rents an estate far from the fighting. There, Irene has a strange encounter with a woman who wants some from the estate, and after Arsène Lupin arrives in town to visit she’s attack by thugs and her locket stolen. Soon, Sherlock Holmes arrives from London, a visit is made to a French nobleman, and before too long, Sherlock and Arsène are on their way to Paris (in ruins and under bombardment from the Prussians) in search of an ancient relic that could save France, followed by Irene when she runs away from home after a terse confrontation with her mother.

Of the four books, this is the weakest. It reads quickly, but some of the plotting doesn’t hang together. It’s not clear why some characters appear where they do in the final chapters, and the last third of the book has a very strange feel as Irene and her friends seem to have stumbled into someone else’s story. There’s a late revelation, alluded to in the previous books, that is both significant but doesn’t add anything to this story. I imagine it’s dealt with in later books, which have not been translated into English and, I imagine, are unlikely to be; The Cathedral of Fear was published, in English, three years ago. I’m not even sure what the titular “cathedral of fear” is, as three, including Notre Dame, figure into the novel. Overall, the story feels a little superficial.

It’s a nice series overall, especially if you know a young Sherlock Holmes fan who wants to read about the Great Detective when he was a boy, but this one’s a weak note for the translated series to end on.