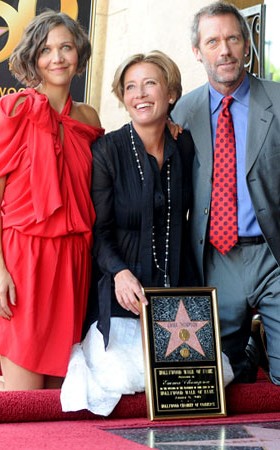 Seeing Thompson and Laurie together reminds me, besides Peter’s Friends (which I’ve not seen in far too long), of a House story I would love to see. Well, okay write, but I don’t see myself going Hollywood.

People have wanted to see Stephen Fry appear on House since, oh, day one. I count myself among them. Hugh Laurie and Stephen Fry, together again! (They’ve filmed a special, to air this fall, called Fry & Laurie: Re-United.) Who wouldn’t want to see this duo together on House?

But why think small?

Try this on for size. House must go to a medical conference in London. He’s not someone who likes going to these functions, and he’s a complete ass as per usual, and the English doctors look at him like he’s a raving loon. And who should play these English doctors? Emma Thompson. Stephen Fry. Rowan Atkinson. Tony Robinson. Tim McInnerny. Miranda Richardson, too. And these doctors treat House like total dirt. Yes, it’s pure stunt casting; the only people who would care would be the people who have followed Hugh Laurie’s career. Still. I’d give my left kidney for an episode of House like this.

According to this old report, Emma Thompson would like to appear on House. It doesn’t have to be my story. Any story would be fine by me. 🙂

As an aside, I had a similar thought for an episode of Boston Legal, but the ship, of course, has sailed on this one.

Alan and Denny go to London. Alan to close a deal to bring some multi-national’s legal business into Crane, Poole, and Schmidt. Denny, just because he’s Denny Crane.

Denny has a mad cow spell. He’s found at the scene of a murder, passed out, covered in blood. What evidence there is points to Denny as the murderer.

Alan, of course, isn’t a solicitor. He can’t handle Denny’s defense. So they have to hire a solicitor to handle the defense and rein in Denny’s antics.

The defense solicitor is played by Patrick Stewart.

The Queen’s Counsel, prosecuting the case, is played by Malcolm McDowell.

It’s maybe a little more Matlock than Boston Legal, but it would have been so much fun. 🙂

Maybe not as much fun as a Blackadder-plus reunion on House, though. 😉