I arrived home from work yesterday to find that three packages had arrived.

One package was a Monty Python CD. I mentioned a few weeks ago that I had none of the comedy troupe’s recorded albums. Now I own six. Of the studio albums, I now lack only Another Monty Python Record and Matching Shirt and Tie.

The other two packages were t-shirts.

One, by James Hance, an artist whom I wrote about here, depicts Doctor Blue — Sesame Street‘s Grover as the eleventh Doctor, complete with fez and bowtie.

The other, by Rob Wood, I wrote about here — it depicts Doctor Pooh, a Time Lord of Very Little Brain. While I bought it through Qwertee, the shirt is still available through RedBubble.

Both arrived yesterday. Naturally, I had to take a picture of the two Time Lords together. 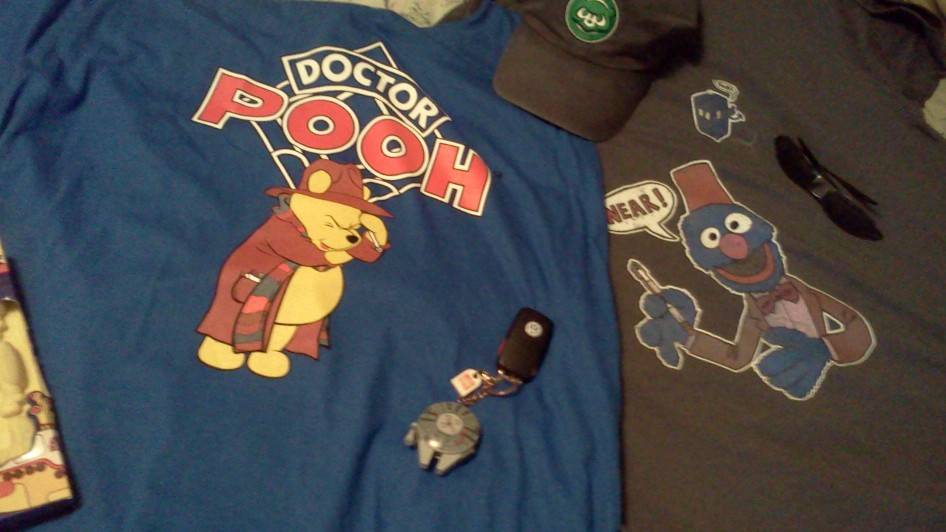 I don’t think I’m likely to wear Doctor Blue, though I absolutely love the design. (And if Hance ever puts it up for sale as a print on his website, I think I’m likely to purchase one.) The print on the shirt is a little fragile, and I fear it wouldn’t survive multiple launderings. But maybe I’m just being overly cautious.

Grover would make a really cool Doctor, wouldn’t he? 🙂