I thought I would never get home.

I sat on the bench on the platform at the State Center subway stop. The train arrived. I boarded and took a seat. An earlier passenger had left a paranormal romance on the seat. I ignored it.

For five minutes this cycle repeated. Finally, the conductor came on the loudspeakers. “I have to restart the train. The lights will go off and they will come back on after thirty seconds.”

The cycle of chimes, doors closing and opening, and brakes engaging and disengaging continued.

Then, when all hope had been lost, the train moved forward. Not with any speed, but forward it moved. If there is such a thing as a collective sigh of relief, surely the hundreds of people on this subway train left forth with one at that moment.

A few minutes later the train arrived at the next station, Upton Avenue.

The driver came on the loudspeaker. “This train is no longer in service. Please exit the train and wait on the platform.”

We abandoned the train. 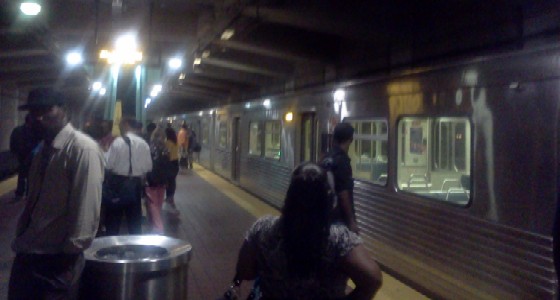 The train departed. Not immediately; it still had trouble with the brakes as they could be heard engaging and disengaging. Finally, though, the train moved forward, and several minutes later the sound of a new train coming up the tunnel could be heard.

There was, however, a near accident as the train approached. A teenager was playing with his skateboard on the platform and doing tricks. He scooted across the platform, did a jump, and nearly plunged off the platform onto the tracks six feet below.

The train, already half full, arrived. Some people crowded onto seats. Others stood in the aisle. I took a spot in the outer doorway, since it would never never open and I had to ride the train to the end of the line.

We sat for several minutes. The reason was obvious — the train we’d abandoned must not have made it to the next stop.

Eventually, we moved. We reached Penn North. And then we reached Mondawmin, the last underground subway station.

The train moved forward. Soon, we would be free of the underground.

Only, on the up incline as the train reaches for the surface, we stopped.

The conductor came on the intercom. “We will be holding here for a few minutes.”

Nowhere to go. Nothing to do. Trapped underground, marooned alive, buried for all eternity.

I was never so thankful to see sunlight when the train emerged from the tunnel ten minutes later.

Clearly, I could never have been in the Navy and served aboard a nuclear submarine. Some people need daylight too much.