Yesterday a package arrived in the mail. It was a book, Douglas Adams’s Starship Titanic by Terry Jones. Hardcover with dust jacket. A first printing, it looks new, even though it was published nearly fifteen years ago.

And with that book I am ready. 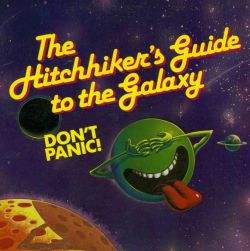 This year — this month, actually — I intend to reread the Hitchhiker’s Guide to the Galaxy series. All six books in the series proper — the five books of Adams’ trilogy (the hardcover, leather-bound edition from Barnes & Noble) plus Eoin Colfer’s And Another Thing… — and Jones’ book as well (which is based on a computer game that elaborated on a reference in Life, the Universe, and Everything). Jones’ book I’ll read in between Mostly Harmless and And Another Thing…; I’ll take the seven books total in publication order.

I’ve not read Adams’ books in a very long time. I read the first four around 1985, I read Mostly Harmless in the early 90s (and I can remember almost nothing about it). In a lot of ways, I’m coming to these books fresh. I really don’t remember them. Broad details, maybe. Not much more.

Starship Titanic? Well, to be perfectly honest, I’ve never read it. I never begrudged its existence, but neither did it interest me. At times over the years I’ve thought about picking it up, and I didn’t. Now I have — and I got it in hardcover for about half the price of the trade paperback. 😉

And And Another Thing…? I wasn’t a fan of the idea of a post-Adams Hitchhiker’s novel when it was announced, and I decided to pretend that it didn’t exist. But about a year ago, I saw it on the bargain table at Barnes & Noble, and I decided five dollars was a righteous price to pay. I took it home, I read the first few pages which recapped Adams’ “Trilogy,” I thought they were funny. Then the story proper began, and I lost all interest instantly. I’m told that And Another Thing… starts off poorly and improves, I just didn’t give it that chance. And, it’s worth noting, I was a long time removed from any Hitchhiker’s.

Thus, a quarter-century-plus after my first encounter with Douglas Adams and in honor of St. Cedd’s Day tomorrow, I’m giving the Hitchhiker’s world another go.

We’ll see how this goes over the next month. There are some books of childhood that you really shouldn’t revisit. I fervently hope the Trilogy isn’t one of them. :h2g2: